AiG's 12 Arguments Evolutionists Should Not Use

Argument 1: Evolution is a fact

AiG says: "When our core beliefs are attacked, it’s often easy for humans to retreat to statements such as this: 'My belief is a fact, and yours is wrong.' That’s exactly why we cannot trust mere human understanding to explain the unobservable past—emotion and pride get in the way. Evolution is not a fact, no matter how many times evolutionists say it is. It’s a framework built on assumptions about the past—assumptions that will never have direct, first-hand, observational proof."

First, let's define evolution. Evolution can refer to two things: either (1) a change in a gene pool over time or (2) the common ancestry of all living things and how those living things changed over time. Creationists almost always agree that (1) occurs, so that's not contentious. What is contentious is (2). So the question is: Is common ancestry of all life a fact? I hate to be so tedious, but once again we have to look at our definitions. If by "fact" we just mean something that is practically certain (maybe not absolutely undoubtable, but still something well-beyond reasonable doubt) then common ancestry is a fact. If by "fact" we mean something that could not possibly be false, even in the judgement of a hardened skeptic, then that would lead me to conclude that the only "facts" that there are are things inside our DIRECT experience and things which are logically certain (contradictions cannot exist, etc.). And of course such a strict definition of the word "fact" could not include the theory of common ancestry because common ancestry is not a logical or mathematical certainty and it is not something we have directly experienced (we haven't literally been able to watch all life evolve from a single species in the same way we can watch the sun rise and set). Under such a strict definition of the word fact, common ancestry would have to be classified as an explanation of the facts or an inference from the facts. And under such a strict definition (and given all of the arguments for it) common ancestry would qualify as a highly probable, practically certain (like 99.99999% certain) explanation of the facts.

Argument 2: Only the uneducated reject evolution

I agree with AiG that this is false. Some very smart and very educated people actually do reject common ancestry (Kurt Wise, who studied under Stephen Jay Gould at Harvard, is a prominent example). However, I would argue that those who reject evolution, even after becoming educated about it, do so because of errors in their reasoning process or because of irrational emotional fears, and not because of proper reasoning and examination of the facts. If I ever meet someone who can validly argue that common ancestry is false in light of all the facts scientists have collected so far, then I would renounce evolutionary theory. However, I have never encountered anyone who can do this.

Argument 3: Overwhelming evidence in all fields of science supports evolution

AiG says: "The irony, of course, is that for centuries prior to Darwin’s publication of On the Origin of Species, the majority of scientists found the opposite to be true: the 'evidence' supported creation. What changed? Not the evidence. Rather, the starting point changed (i.e., moving from the Bible, God’s Word, to humanism, man’s word). Creationists continue to see everything in light of God’s Word and all evidence as supporting the biblical account. In reality, there is no 'neutral' starting point; everyone—whether they acknowledge it or not—interprets the 'facts' according to a particular way of thinking (i.e., worldview)."

AiG says: "Why does this argument fail? We’ll show you. Take a pencil or pen. Hold it in the air. Then drop it to the floor. That’s gravity. Next, make a single-celled organism—like an amoeba—turn into a goat. Go ahead. We’ll wait. . . . No? As you can see, there’s a fundamental difference between operational science, which can be tested through repeatable experimentation, and historical science, which cannot."

False. Evolution is testable and has been tested. And it passed with flying colors.

Argument 5: Doubting evolution is like believing the earth is flat

AiG says: "Ironically, the Bible describes the earth as round and hanging in space—long before this could have been directly observed (Job 26:10; Isaiah 40:22). The appeal of this claim is that it stereotypes creationists as stuck in the past, since the common assumption is that people once universally believed the earth was flat before science 'proved' otherwise (which wasn’t the case—only a few bought into the idea that the earth was flat). But even if this were true (it’s not), direct, repeatable observation shows us the earth is round and orbiting the sun. Evolutionary stories about fossils are not direct observations; they’re assumption-based beliefs."

I agree that flat earthism and young earth creationism are on essentially the same level of irrationality. No sane person should take them seriously. As for the claims about the Bible describing the earth as round: I've dealt with those in my book, Atheism and Naturalism. Isaiah 40:22 describes the earth as a circle (not a sphere) even though the Hebrews had a word for sphere. Job 26:10 (KJV) simply says "He hath compassed the waters with bounds, until the day and night come to an end." I have no clue how that indicates that the earth is round. I'd appreciate any suggestions on how that could indicate such.

Argument 6: It’s here, so it must have evolved

I can half-way agree that with AiG that this is a bad argument. The argument, stated this way, is circular. However, Richard Dawkins has argued that evolution by natural selection is the only known ultimate explanation for the origin of information (See The Blind Watchmaker

and The God Delusion

Of course natural selection isn't evolution! Natural selection is the mechanism by which evolution (a change in the gene pool) occurs. It is the primary mechanism used to explain the differences that have accumulated in different species since their last common ancestor.

Now that we have made the right linguistic distinctions, I think AiG does have a point. I've seen tons of youtube videos in which people have given examples of natural selection and/or changes in gene pools when asked for evidence of evolution. Of course, the change in the gene pool is one of the definitions of the word "evolution". But again, most creationists don't doubt evolution in that sense of the word. What they doubt is evolution in the sense of common ancestry, and so evidence of common ancestry is what must be provided. Change gene pools doesn't prove common ancestry.

I actually agree that at least some commonalities in body plans and bone structure are not (by themselves) evidence for common ancestry, since the commonalities could be explained by a "common designer" as AiG puts it. However, some types of commonalities (like vestigial structures, non-coding DNA [which I discuss in Atheism and Naturalism], etc.) are evidence for evolution over creation, and, more importantly, evolution can predict not only the types of similarities we see in organisms, but also the differences, as I've discussed here.

Strictly speaking, this isn't argument only made by evolutionists. Any who believes the earth is old could make this claim, whether they accept evolution or not. In fact, old creationists often do defend such arguments. But enough about that: AiG's point once again seems to be that if we didn't sit and watch these sedimentary layers form over millions of years then we can't say it was formed over millions of years. Anything else would be just a subjective human opinion that carries no epistemic weight at all. Of course this is baloney. Determining the age of sedimentary layers involves ordinary inductive reasoning: that is, explaining the evidence with the causes that we have always observed to produce the effects we are seeing now. AiG's argument here is just as ridiculuous as a juror who refuses to convict someone of rape, even in the face of DNA evidence, because they weren't there to witness the rape and can't be sure if the same laws of biochemistry were operating when the alleged rape took place.

AiG once again hauls out the old canard that mutations cannot produce "new information" which is false.

AiG discusses what they believe are common misperceptions about the trial. The Scopes Trial really has nothing to do with the truth or falsity of evolution, so I won't comment on it here.

Once again, it's difficult to see how AiG could think of the above (which appears to be a statement of a certain mentality) as an "argument." Their commentary on this simply says that "science" doesn't oppose religion, but that it is atheists and humanists who oppose religion, and then the commentator tells us that there would be no reason to do science if we didn't live in a God created universe (see here -- that's false). Of course I disagree. Many religions, especially Christianity, are subject to proof/disproof by what we observe in the world, which makes Christianity, at least in part, a scientific hypothesis. The fact that it is subject to proof/disproof only puts it in conflict with science when it makes predicitions which turn out false, which it has (the hypothesis that a perfect God created the world predicts a perfect world, but our world is not perfect, therefore God did not create the world).
Posted by AIGBusted at 2:40 AM 3 comments:

R.J. Richards wrote an article of the above name and published it in Biology & Philosophy. He argues that Haeckel has been unfairly persecuted and that his drawings are a bit more accurate than his opponents have given him credit for. You can read the paper here. Go head, it's only 8 pages and it is easy to understand.
Posted by AIGBusted at 12:00 AM No comments:

Dawkins and the Ultimate 747 Argument

Someone has written perhaps an even better assesssment of Richard Dawkins' Ultimate 747 argument than I have:

I think his line of reasoning is similar to my own:

Although he has written in a much clearer and more concise fashion than I have.
Posted by AIGBusted at 9:10 AM No comments:

Why Do People Laugh At Creationists Part 33

Posted by AIGBusted at 6:35 AM No comments:

Here is the most complex and fascinating lecture you'll ever hear about a simple concept: Ask-a-Mathematician discusses how we know 1+1=2.

An article in Playboy looks at the trends in breast shapes we have liked through the decades. I'm an eighties man myself ; )

Mike Licona and Richard Carrier debate the resurrection of Jesus Christ again.
Posted by AIGBusted at 12:51 AM 1 comment:

What Pascal's Wager Is .

A Good Way to Respond to it: 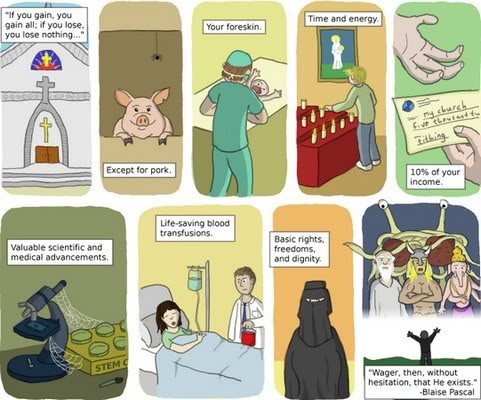 Posted by AIGBusted at 5:46 AM No comments: