I came across an article on Answers in Genesis which had a rather outrageous claim. It quoted Evolutionary Biologist Alan Feduccia saying, "Paleontologists have tried to turn Archaeopteryx into an earth-bound, feathered dinosaur. But it's not. It is a bird, a perching bird. And no amount of 'paleobabble' is going to change that." I emailed Feduccia about this, and he responded,

Yes, of course this is preposterous. I was the person who coined the
phrase in 1980 that, "Archaeopteryx is a Rosetta Stone of evolution!"

Archaeopteryx is clearly transitory between reptiles and birds; the
question is: what group of reptiles. The current dogma is that birds
are directly derived from theropod dinosaurs, but there are numerous
serious problems with this proposal, namely,

-the time line is all wrong.
-requires a ground-up origin of flight.
-many characters don't match, especially the digits.
-requires that all sophisticated flight architecture be evolved in an
earth-bound, flightless dinosaur!!

At any rate count on the creationists to misquote people to foster
their
cause.

Plagiarism?
These two articles, one from AiG and the other from another creationist site both contain the following sentence:
"Dr. Alan Feduccia, a world authority on birds at the University of North Carolina at Chapel Hill and an evolutionist himself, said" Followed by Feduccia quoted out of context. Coincidence?

Update: The science blog Pharyngula has made a post concerning Jonathan Sarfati's article on bird evolution, and the objection to dinosaur/bird evolution based on dino and bird digit differences, I highly recommend it:
http://pharyngula.org/index/weblog/comments/digit_numbering_and_limb_development/ 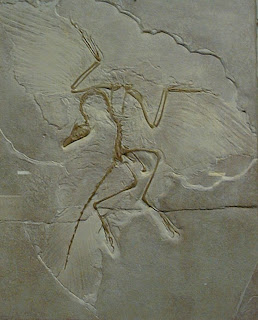 Posted by AIGBusted at 6:49 PM

awesome! keep it up. i swear the only visitors to the AIg/UD/other creationists sites are from us skeptics.

Then that sounds like a very meaningless enterprise, if techskeptic is right.

I wouldn't say that only skeptics visit AiG, as they are a very widely used creationist resource.

I had earlier read that article. Anyway AIG is an excellent joke website. What do they say about numerous reptilian characteristics of archaeopteryx. I would like to have a laugh.

Another view: Dinosaur Feathers? Probably Not.